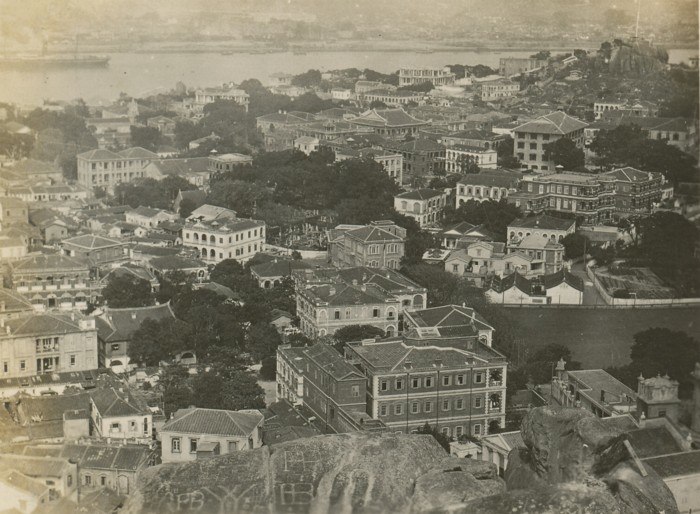 Kulangsu is an island about 600 meters from southwestern coast of Xiamen, Fujian. Slightly long and narrow, the 1.88-square-kilometer Kulangsu Island looks like a sailing ship anchored in the bay. There are seven granite hills as well as numerous ravines and springs scattered on the island. An alternating distribution of white beaches and oddly shaped rocks around the island adds to the beauty of the place. With a pleasant climate, thousands of plants and widespread green trees, Kulangsu is a picturesque and livable island in the Xiamen Bay.

The name of Ku-lang-su is formed of 3 characters: Ku refers to drumbeat; Lang refers to the tide; Su means island. Legend says that while the tides hits a huge rock on the southwest coast and the water goes through its hole, it generates a sonorous sound like beating several drums. Thus the rock got its name as “Drum wave stone”, then this little island was named after the rock, called “Kulangsu” (transliterated as “Kulangsu” at that time).

From the mid-19th century to the mid-20th century, the unique history and dynamic cultural landscape of Kulangsu, an international community jointly administered by Chinese and foreigners, highlighted a world integration of multi cultures, a comprehensive practice of the emerging modern life style as well as a full blossom of the adventurous, open and inclusive migrant culture of southern Fujian, and brought a unique and prominent achievement in the communicative process of human civilization.

The formation of Kulangsu was based upon the scattered traditional settlements constructed by the early residents of southern Fujian. Then its development afterwards can be divided into 2 main stages by the Land Regulations for the Settlement of Kulangsu, Amoy, which was reached in 1902 and signed effective by the Chinese emperor in 1903. The first stage featured by the foreign culture dissemination and then the second stage featured by the fusion of multi-cultures.

The first stage started from the mid-19th century. Since Xiamen was opened as a commercial port, Kulangsu, as an ideal place of residence for the foreigners working in concessions areas, became immediately the frontier of international culture introduction as well as a meeting place of various national forces. Foreign missionaries, consular and diplomatic officers, together with businessmen successively came to live on the island and introduced western architecture, modern community amenities including schools, hospitals, clubs, and infrastructures like roads and cemeteries. Additionally, Kulangsu functioned as a base for modern western culture, technology, and life style to be disseminated to southern Fujian and even inland China.

There are three different views about how “Kulangsu” was named. Some people believe that the name originated from the hearing. It is said that in the past there was a rock with a hole in it on the southwestern coast of the island, and every time the rock was lashed by waves, it would make a sound like drumming. Therefore, the rock was named “Kulang Stone” and the island was called “Kulangsu”. However, some other people believe that the name originated from the vision.

It is also said that if looking down from a high place, one could see waves, like beating drums, surged towards the shoreside rocks. Another view is that the name originated from geomancy. According to the geomantic omen, the five hills on the Kulangsu Island sprawling from the northwest to the southeast were considered to be the gathering of five dragons, therefore also called “Five Dragon Island”, and in Amoy, “Five Dragon” is similar to “Kulang”, which finally developed to be “Kulangsu”.

Southern Fujian, where Kulangsu is located, has seen the formation of southern Fujian culture, the unique regional sub-culture, during the long historical development. Southern Fujian culture inherits the farming culture of the Han people in Central Plains, and integrates maritime commerce culture during trade and population exchanges with overseas areas. After the mid-19th century, a large number of residents in southern Fujian moved overseas and formed the migrant society in local places. Decades later, they took part in construction of southern Fujian as overseas Chinese or returned overseas Chinese, injecting vigor to local economy, making southern Fujian more influenced by internationalization and developing the regional subculture, characterized by mercantilism, pragmaticism, aggressiveness, openness, innovation, flexibility and inclusiveness.

Cultures started to collide and exchange in Kulangsu, then blended and matured through long historic process. The second stage was from 1903, when the Land Regulations for the Settlement of Kulangsu, Amoy took effect and a large number of overseas Chinese returning from Southeast Asia began to join in the political and economic construction of Kulangsu, to 1941 when the Pacific War broke out and forced residents to leave amid social turmoil. Thanks to its unique geographic location, loose political atmosphere, multicultural environment and good quality of life, Kulangsu became a safe island rare on China’s southeast coast at its time and thus attracted a great number of foreigners, overseas Chinese and local Chinese to settle down.

In particular, the increasing number of returned overseas Chinese gradually became the leading force facilitating the construction of houses and public amenities and the development of industry and commerce on Kulangsu, and created new architectural and decorative styles with local features including Amoy Deco. In this period, supported by the sound community environment and modern education, Kulangsu nurtured a great many Chinese and foreign elites whose achievements in linguistics, literature and education influenced the popularization of education and the spread of Christianity in Southeast Asia and southern Fujian.

Developed to this point, under the combined influence of multicultural powers, Kulangsu established a series of modern spaces and facilities for culture and education, medical treatment, infrastructure, sports, entertainment, and finance, which further improved the community function and service of Kulangsu and showed the prosperity at the culmination of its development.