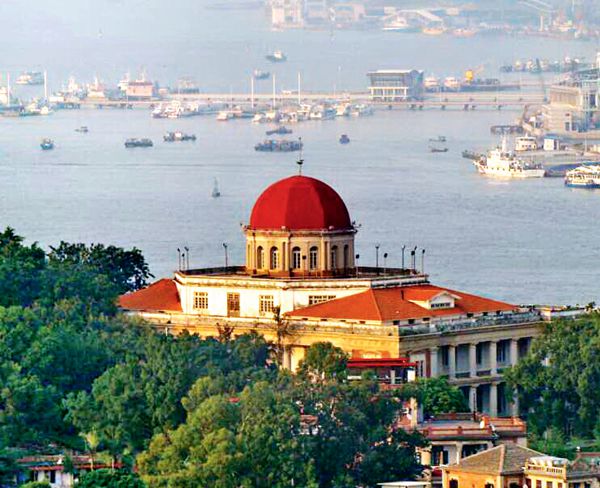 The Kulangsu organ museum’s beautiful red dome is visible from across the bay in Xiamen. The museum, housed in the old Bagua Mansion, is one of Kulangsu’s most important tourist attractions – both for its impressive collection of organs and for its stately and imposing architectural style.

The Bagua Mansion, also known as Eight Diagrams Mansion, is a good representation of early  Xiamen architecture. It was constructed by Taiwan businessman Lin Heshou and designed by Dutch American John Abraham Otte, director of Hope Hospital, in 1907. Lin Heshou aspired to build a villa blending classical eastern and western architectural styles, but the project was so costly that Lin Heshou had to mortgage his properties to get a loan from the Japanese-owned “Bank of Taiwan”.

Lin Heshou eventually went bankrupt and, leaving the project unfinished, hightailed it back to Taiwan, never to return. Afterwards the Japanese repaired the house and set up the “Xuying Study”. During the war with Japan, Bagua Mansion was a refugee asylum. After the war, it was taken over by the Kuomintang government.